Let's turn our thoughts to Ascension Day. We hope you can join us on Facebook Live at Messiah Houston, 9:00am Central Time.
Posted by The New Narthex at 7:31 AM No comments: 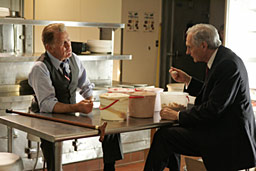 In his run for office, Vinivk has run into a problem. He doesn't go to church.

He and Bartlet talk about the issue and Vinick explains that the more he read the Bible, the harder it was to believe in what it taught, especially regarding the strict penalties for such things as working on the Sabbath or adultery.

He then points out that the Bible is silent on the issue of slavery and that Lincoln could have used some Scriptural support during that social justice struggle.

Well, to be honest, the words "social justice" aren't in the script, but they would be if that episode were written today instead of sixteen years ago.

The truth is that the Bible does not directly address issues of social justice such as slavery or racism.

Jesus Himself was no social justice warrior in the modern sense of the term. He didn't host rallies. He didn't organize protests. He didn't advocate civil unrest.

Does that mean that Jesus didn't care about social issues? Did Jesus approve of slavery? Was He unconcerned about the plight of the poor and disenfranchised? By no means!

Jesus, however, chose a different path to address those concerns.

He taught a very simple truth: Love your neighbor as yourself (Matthew 22:39).

His words get to the core of social justice concerns.

If I love my neighbor, how can I own him as a slave?

If I love my neighbor, how can I cheat her or mistreat him?

If I love my neighbors, how can I discriminate against them?

The principle of "love for neighbor" makes those things unthinkable.

Jesus' words were actually drawn from Leviticus 19:8, which reads, "Do not seek revenge or bear a grudge against anyone among your people, but love your neighbor as yourself."

Do not bear a grudge, but love your neighbor.

Jesus's words about love present a challenge to today's social justice movement just as they challenge those guilty of perpetrating injustice.

Rather than trying to overturn the social order of His day, Jesus set forth a manner of life that would provide a platform for social change generation after generation, because each generation will face its own set of social ills.

Lasting social justice and reform, however, is not accomplished by enacting laws or cancelling culture.

Rather, it comes when people on all sides of the issues are taught to love one another, to love their neighbors as themselves.

Posted by The New Narthex at 8:22 AM No comments:

Are you only Jesus' servant, or are you His friend?
Posted by The New Narthex at 7:58 AM No comments:

Philip's encounter with the Ethiopian official shows us how to tell others about Jesus.
Posted by The New Narthex at 10:56 AM No comments:

God has the answer for a condemning conscience.
Posted by The New Narthex at 11:14 AM No comments:

Like Peter and the temple crowd, we have also denied Jesus.
Posted by The New Narthex at 9:12 AM No comments:

Jesus has a special place in His heart for unbelievers like Thomas.
Posted by The New Narthex at 11:46 AM No comments:

A narthex is the entryway of a church where people reconnect. This blog is kind of like that.